Warning: Use of undefined constant PWP_NAME - assumed 'PWP_NAME' (this will throw an Error in a future version of PHP) in /home/customer/www/blog.urthecast.com/public_html/wp-content/mu-plugins/wpengine-common/wpe-sec.php on line 63
 Space Tests: UrtheCast Cameras Prepare for Flight - UrtheCast Blog

Blasting through five layers of the Earth’s atmosphere takes its toll, and marks only the beginning of a trek that will take the UrtheCast cameras, Iris and her partner, to the International Space Station. Once beyond our atmosphere and into outer space, Iris will hurtle around the globe at speeds of about 28,000 km/hr, 400 km above sea-level. This won’t exactly provide us with the ideal environment for recording high resolution video footage, but the team over at the UK’s Rutherford Appleton Labs (RAL) are resolute in getting Iris in fine form for her flight this fall. Here’s how:

For decades, static images remained the standard for providing global imaging to the world; a technique that was perfected, culminating in ventures like Google Earth. Now that we’re ready to provide a platform for video, capturing the data involves its own set of issues — firstly in transporting delicate equipment over 300 miles through an unforgiving atmosphere. Ranging from vibrations, to temperature fluctuations, to space junk, innumerable hurdles stand in the way. Fortunately, the risks posed by these hurdles can be mitigated. 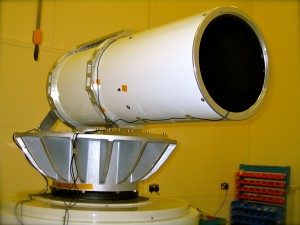 On the Look Out

Iris will be fixed to a platform on the Russian segment of the International Space Station, with a nadir view of the Earth’s surface. (The highest possible resolution is offered in nadir mode, as the camera is focused on the area directly below the ISS.) Iris and her partner will operate continuously during daylight hours, and rather than processing the images inside the camera, the data will be downlinked to Earth. This way, correcting frame-to-frame jitter won’t need to take place within the camera electronics. What’s more, Iris will be situated on a fully steerable platform so as to give her — and you — a better view of the world below.

At her core, Iris is a combination between a ruggedized telescope and a 2D video sensor system developed by RAL Space. Once her construction and testing are complete, Iris should remain a rather low maintenance camera, requiring refocusing about once a month, either by a member of the ISS crew, or by ground control commands. 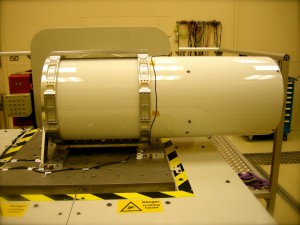 How Will Iris Work?

The UrtheCast cameras will employ a push broom imaging method. This entails a row of image sensors that are alined perpendicular to the flight path of the ISS. As the ISS travels forward, imagery of select areas of the Earth are collected. The push broom method gathers a relatively large amount of  light when compared to the whisk-broom method, as it focusses on particular areas for longer periods. Iris will record the image for up to two minutes, while her steerable platform keeps the region of interest — Moscow, Russia, for example — centred within the detected field of view.

Putting Iris Through Her Paces

To ensure that Iris and her partner can withstand drastic temperature, pressure, and physical challenges, they will be put through a wide battery of tests. Depending on which hemisphere you reside in, temperature changes generally don’t have disastrous impacts on your health — you simply adapt and move on. Space, of course, is a whole different world. To make certain that Iris has nothing to complain about, thermal testing will allow our London team to make sure the cameras can withstand an operational thermal range of -10°C to 30°C. Further survivability testing will be carried out across the expected thermal range of -20°C to 40°C to test the boundaries of the cameras’ tolerance.

Survival of the Shaken

Another element of survivability involves vibration testing.  Iris will be shaken at various frequencies to make certain that she can withstand the ups and downs of her trip. As a final test the cameras will be notched, which is a technique ensuring they will be able to survive the stresses of their long journey to the ISS, and their even longer journey through space.

Move over, commercial human space flight programmes, because computer hackers intend to go where no average citizen has gone before — to the outer limits of our atmosphere. If funds allow for it, the Chaos Computer Club aims to combat internet censorship with the launch of multiple communication satellites; part of a broader space initiative [...]