Warning: Use of undefined constant PWP_NAME - assumed 'PWP_NAME' (this will throw an Error in a future version of PHP) in /home/urthecas/public_html/blog/wp-content/mu-plugins/wpengine-common/wpe-sec.php on line 63
 Calgary company to provide high-definition eye in the sky - UrtheCast Blog

Calgary company to provide high-definition eye in the sky 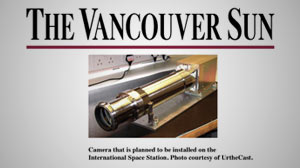 A Calgary-based company is shooting for the stars with the construction of two high-definition video cameras that will transmit images of Earth back from the International Space Station.

UrtheCast will build and operate the cameras — one medium resolution and one high resolution — that could begin supplying a live video feed and images from the Russian module sometime next year. The data and imagery will be downlinked to ground stations and displayed online in real time.

UrtheCast president Scott Larson said the company’s cameras and web platform will allow users to constantly track the space
Recommend 3 station’s whereabouts, anticipating when it will pass over a specific location. Viewers can interact with the cameras and search for videos of particular locations.”Users will be able to view Earth from space. It will operate seamlessly with social media sites like Facebook and Twitter,”said Larson.

UrtheCast is working with RSC Energia of the Russian Space Agency, which will install and maintain the cameras on the
space station.

UrtheCast will launch the project in Calgary next Tuesday when Canadian Space Agency astronaut Dave Williams speaks to
the Chamber of Commerce about issues such as space exploration, science and technology.

The cost of the cameras is not being disclosed, although Larson said “it’s certainly in the millions.””It’s a little like a live version or a current version of Google Earth combined with YouTube. That’s kind of like how we
describe it,” he added.

It will take about a year to build the cameras, which will be installed by Russian cosmonauts on a future spacewalk. That
could occur as early as the spring or early summer of 2012.

Larson said the Calgary company has been raising financing for the project during the past four or five months.The medium-resolution camera will capture a 45-kilometre-wide view, while the high resolution camera will cover A fivekilometre
swath.”This will allow users to see man-made objects and groups of people,” said the company.

Share“Calgary company to provide high-definition eye in the sky”