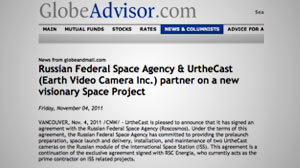 UrtheCast is pleased to announce that it has signed an agreement with the Russian Federal Space Agency (Roscosmos).

Under the terms of this agreement, the Russian Federal Space Agency has committed to providing the prelaunch preparation, space launch and delivery, installation, and maintenance of two UrtheCast cameras on the Russian module of the International Space Station (ISS). This agreement is a continuation of the exclusive agreement signed with RSC Energia, who currently acts as the prime contractor on ISS related projects.

The Russian Federal Space Agency, UrtheCast, UK Rutherford Appleton Labs and RSC Energia are all committed to taking advantage of this unique opportunity to fundamentally impact education, environmental awareness, and social interaction. The cameras will be transported by the Russian Federal Space agency to the International Space Station in 2012.

UrtheCast is building, launching, and will operate the world’s first high-definition streaming video platform of planet Earth. The video feed (3-5 frames per second totalling 2.5 terabytes of single meter resolution imagery daily) will be gathered by the cameras onboard the ISS, downlinked via the Russian communications antennas, received on Earth at ground stations, and then transmitted to the UrtheCast operations center where the video will be processed and made Internet ready.

UrtheCast.com will combine a consumer centric website, mobile application for smartphones, and an open Application Program Interface (API). Users can “favourite” video feeds, see the current activity of their friends on the platform, integrate with their Facebook account, and more. Geo-tagged media from all over the web will be aggregated and included in the UrtheCast media database.

UrtheCast chief executive Scott Larson says “The goal of UrtheCast is to bring together geo-tagged educational, environmental, geographical, and social components in a real-time environment. You’ll be able to track forest fires, icebergs, animal migration, and oil spills in the ocean. These things will all tie in to social movements like Earth Day, the struggle for freedom in various parts of the World, and to the beauty of landscapes, culture, history, politics and music. People want to see what Earth looks like from space. When you talk to an astronaut or cosmonaut who has been to space they come back with a totally different appreciation for our planet. We are convinced that having a live feed of Earth, from the ISS, will help us all develop a greater appreciation of this planet and of each other.”

What would last week have looked like on UrtheCast?

The UrtheCast Camera will orbit around the world 16 times a day allowing the camera to catch approximately a hundred minutes of live videos of earth. That is a lot of potential footage of the earths daily events not to mention the amazing places on earth like the Pyramids in Egypt or a volcano erupting. On any given day there are hundreds of news worthy events that take place that UrtheCasts cameras could catch. Lets take a look at what happened last week in the news that the cameras may have been able to catch.