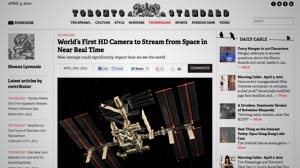 There are no small steps only giant leaps for Canadian startup UrtheCast. The company is set to launch the world’s first and only near real time HD video cameras from space later this year – and the potential of these cameras could significantly impact scientific research, education and how we view international news. For the first time we will have access to an uninhibited vantage point – an angle so significant to seeing how events unfold – the view from above.

“Astronauts say that when they go up into space and they look down at the earth – it changes them. When they come back they’re different from when they went up,” says UrtheCast president Scott Larson. “Being able to see how icebergs are moving, forests are changing and animals are migrating – seeing how we interact with the planet – that is going to be the coolest thing that comes out of the project.”

Two cameras built by the UK’s Rutherford Appleton Laboratories will be installed on the Russian module of the International Space Station. This space station travels at 26,000 km per hour, orbits the Earth 16 times a day and can be seen by the naked eye. It is a research partnership between the Russian, European, Canadian, Japanese and US space agencies – and is easily the largest space project to date.

The cameras were originally commissioned as a way to give the Russian Federal Space Agency publicity. But when a contact didn’t want to develop the cameras, they reached out to Larson who had previous involvement with Russian space and a background in technology and financing. He saw the project’s potential. Larson and his team are since based out of Vancouver, but UrtheCast also has teams in Calgary, San Francisco, Russia and the UK.

The first camera is a fixed medium-resolution lens that can see objects up to five metres tall. The second is a high-definition camera that can be adjusted and controlled through coordinates. This camera can identify items up to a metre in height, and while Larson says it can’t provide a clear view of the guy mowing his lawn in the backyard, it can show groups of people and crowd interaction.

The HD camera’s real magic lies not just in its ability to capture high-definition footage, but the potential to anticipate and manipulate the lens angles as the space station nears a desired geographical location. This will provide a profoundly unique perspective on major international events. Just imagine an aboveground perspective of the Olympics, the nuclear meltdown at Fukushima or the Arab Spring uprising.

Much of the cameras motions can be automated, but Larson says the camera will be manually adjusted and “scheduled” based on international conversation fueled by social media. Say a tsunami was trending on Twitter, the controllers at UrtherCast’s operations station in Vancouver could adjust the camera to capture the tsunami’s impact from above – then stream it to the web platform that is currently being developed in San Francisco. Users can upload their own footage of the tsunami, so if you were to search for it within the platform you could see both the local perspective and the scene from above.

There is a minor delay in the streaming. First, the images will be compressed, downlinked to various reception stations around the globe, and then transmitted to the operations centre where the data stream is then uncompressed. It can then be streamed to servers and uploaded to the web platform where it can be viewed, downloaded and manipulated by users around the world.

The possibilities of the cameras are vast, unique and exciting and open doors for science, education and social commentary in new ways.

But these cameras could be used for more political reasons, no? Do they have the potential to change warfare? Can they see in the dark? The details of the cameras are not enough to drastically change anything military, Larson said, plus the military has its own satellites. The cameras can pick up city lights and fireworks, but are not equipped with night vision.

UrtheCast generated a ton of buzz during last month’s SXSW when it unveiled Alpha One, the first iteration of its HD camera. UrtheCast combined previous satellite imagery of Austin with camera images they filmed from a plane to showcase a taste of the technology’s capabilities. I saw almost as many people tweeting about that as they were the free UrtheCast hipster sunglasses the company gave away.

The cameras are set to go up in space in fall 2012 and the platform will go live shortly after. The basic platform will be available to the public for free and additional data will be sold to governments and outside companies.

Picking the Brain of a Sci-Fi Scientist

Let’s take a break from science fact for a minute to get behind the scenes of a whole new world for the UrtheCast blog — science fiction. Recently, we decided to pick the brain of Dr. Kevin Grazier, former NASA scientist and science advisor on television programs such as Battlestar Galactica and Eureka, in order to peer [...]