UrtheCast Corp. (TSX:UR) (“UrtheCast” or the “Company”) today announces financial results for the three and twelve months ending December 31, 2015. The Company reported revenues of $13.4 million and $41.1 million for the three and twelve month periods ending December 31, 2015, respectively, compared to $11.9 million of revenues for both periods in 2014. The Company’s non-IFRS adjusted EBITDA, excluding share-based payments, was a loss of $7.7 million in the fourth quarter (compared to a profit of $7.4 million in 2014 due to the recognition of $8 million in insurance payments) and a loss of $12.9 million for the year (compared to a loss of $2.4 million for 2014). At December 31, 2015, the Company had total cash balances of $47.5 million and working capital of $44.2 million.

With all four sensors now fully operational, the Company’s Earth Observation business has been fully consolidated, from satellite operations through to sales and customer service within the new Earth Observation group. Theia, Iris, Deimos-1 and Deimos-2 now form a diverse suite of sensors in an integrated market offering. UrtheCast’s distributor network has been provided with the Company’s joint sales materials and price lists and the Company’s consolidated sales team has been presenting the combined offering to customers around the world. This alignment of UrtheCast’s sales efforts coincides with the upcoming Northern hemisphere growing season.

Working with its strategic partners, UrtheCast’s engineering team has successfully completed several technical and programmatic milestones for the SAR sensor development and the spacecraft design for its planned OptiSAR™ constellation. The initial design has advanced well past the R&D phase, with successful prototype testing completed of the SAR digital sensor electronics and novel dual frequency antenna demonstrating the advanced performance capabilities and powerful cost efficiency that UrtheCast’s technology enables. UrtheCast believes that achieving these critical milestones substantially reduces the technical risk of the Company’s ground-breaking new technologies and will provide prospective customers with greater confidence.

UrtheCast’s innovative cloud-based web platform continues to be built out and developed with strong customer input. Over the last quarter, the Company’s development team has completed work necessary to allow continuous updates to the web platform of new data being acquired by Theia, Deimos-1 and Deimos-2. With this work complete, UrtheCast has released customer pricing for its GeoTIFF monthly subscription program, allowing customers to subscribe to an Area of Interest (AOI) and constantly receive GeoTIFF images via UrtheCast’s API’s as they are added to the Platform. UrtheCast believes the ability to provide a continuous stream of fresh data to web platform users is imperative to the Company’s analytics customers, and is another key benefit of the Deimos acquisition.

Having now transitioned from startup to full operations under new CEO Wade Larson, UrtheCast’s leadership team recently undertook a review of the Company’s operations, its expenditures, and its strategic plan for 2016 and beyond. That effort culminated in decisions to reallocate investments to areas of greatest profitability growth and to implement a new organizational structure to realize better operating efficiencies between its North American and European operations. The new, vertically-integrated Company structure consolidates its operations in the three new “pillars” of Engineering Services, Earth Observation, and the Web Platform.

The Company obtained a senior secured term loan of €25 million, representing approximately CAD$37.5 million from Banco de Sabadell, S.A., which provides solid footing to execute on its 2016 objectives. The loan has a five year term and will accrue interest at the EURIBOR 6 month rate (but no less than 0%) + 2.6% per annum. Of the loan, €20 million was used to reduce an inter-company loan made by UrtheCast to its Spanish subsidiary in connection with the acquisition of Deimos Imaging, S.L.U. from Elecnor, S.A. in July 2015.

In the fourth quarter of 2015, the Company made a final claim of $7.3 million under its insurance policy. Notwithstanding these claims, Iris continues to produce videos that meet the needs of certain segments of the market.

The following table provides selected financial information of the Company, which was derived from, and should be read in conjunction with, the audited consolidated financial statements for the year ended December 31, 2015. 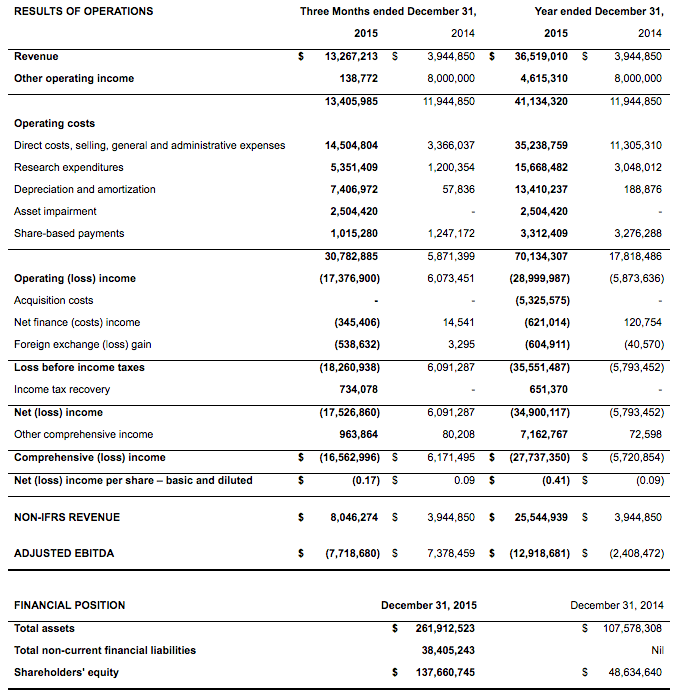 “Fiscal 2015 was a tremendous year for UrtheCast,” explained Wade Larson, CEO and Co-founder. “The acquisition of Deimos Imaging and the advancement of the OptiSAR Constellation were among the many highlights for the company. Our people are ready to show why we believe that our plans will change the Earth Observation and Geospatial Data Analytics markets for years to come. Our team is very much looking forward to providing an in-depth review of the Company, its key initiatives, strategy and vision during our first Capital Markets Day later today. I encourage everyone that cannot attend our event to watch the live stream, a link for which can be found on our website.”

In lieu of holding a conference call discussing these financial results, the Company will be holding a Capital Markets Day. The event will be held today at the TMX Broadcast Centre Gallery from 1:30 PM to 4:00 PM Eastern Daylight Time. Live web stream details will be made available on the Company’s website (https://www.urthecast.com/), and a recorded version will be archived on the site following the event.

This event is expected to provide in-depth reviews of the Company’s strategy, its key technologies, the competitive and industry landscapes, and the expected future market opportunities. In addition to presentations from the executive, engineering, web and finance teams, participants can benefit from direct and informal access to the Company’s management throughout the event.

UrtheCast Corp. is a Vancouver-based technology company that serves the rapidly evolving geospatial and geoanalytics markets with a wide range of information-rich products and services. The Company currently operates four Earth Observation sensors in space, including two cameras aboard the International Space Station and two satellites, Deimos-1 and Deimos-2. Imagery and video data captured by these sensors are downlinked to ground stations across the planet and displayed on UrtheCast’s cloud-based web platform, or distributed directly to partners and customers. UrtheCast is also developing and anticipates launching the world’s first fully-integrated constellation of multispectral optical and SAR satellites, called OptiSARTM, which the Company believes will revolutionize monitoring of our planet with high quality, high resolution, and high revisit imagery in all weather conditions, any time of day. Common shares of UrtheCast trade on the Toronto Stock Exchange as ticker ‘UR’.

This release contains certain information which, as presented, constitutes “forward-looking information” or “forward-oriented financial information” within the meaning of applicable Canadian securities laws. Forward-looking information involves statements that relate to future events and often addresses expected future business and financial performance, containing words such as “anticipate”, “believe”, “plan”, “estimate”, “expect” and “guidance”, statements that an action or event “may”, “might”, “could” or “will” be taken or occur, or other similar expressions and includes, but is not limited to, statements relating to: UrtheCast’s expectations with respect its current sensors and proposed OptiSAR™ constellation; financial guidance for the 2016 financial year; anticipated cash and financing needs; its plans for and timing of expansion of its product offering and value-added services; its future growth and operations plans; the acceptance by its customers and the marketplace of new satellite imaging content, technologies and solutions; its ability to attract new customers; its competitive position and its expectations regarding competition; regulatory developments and the regulatory environments in which it operates; and anticipated trends and challenges in its business and the markets in which it operates. Such statements reflect UrtheCast’s current views with respect to future events. Such statements are necessarily based upon a number of estimates and assumptions that, while considered reasonable by UrtheCast, are inherently subject to significant uncertainties and contingencies. Many factors could cause UrtheCast’s actual results, performance or achievements to be materially different from any future results, performance, or achievements that may be expressed or implied by such forward-looking statements, including, among others: any delays or failures in the design, development, construction, launch and operational commissioning of the proposed OptiSAR™ constellation; the Company being unable to convert the Memoranda of Understanding in respect of funding of the OptiSAR™ constellation into binding, definitive agreements failures aboard the International Space Station (“ISS”) or the Deimos-1 or Deimos-2 satellites; failure to obtain, or loss of, regulatory approvals; interruptions to or failures of UrtheCast’s infrastructure; market acceptance of UrtheCast’s current and proposed products and services; the addition and successful operation of new features, and growth of revenue, on UrtheCast’s web platform; uncertainties and assumptions in UrtheCast’s revenue forecasts; legal and regulatory changes; risks that UrtheCast may be unable to raise additional financing should its expected revenues not materialize; UrtheCast’s success in expanding sales into new markets; competition in UrtheCast’s industry; as well as those factors and assumptions discussed in UrtheCast’s annual information form dated March 29, 2016, (the “AIF”), which is available under UrtheCast’s SEDAR profile at www.sedar.com. Forward-looking information is developed based on assumptions about such risks, uncertainties and other factors set out herein, in the AIF, and as disclosed from time to time on UrtheCast’s SEDAR profile. UrtheCast undertakes no obligation to update forward-looking statements except as required by Canadian securities laws. Readers are cautioned against attributing undue certainty to forward-looking statements.

On March 30, from 1:30pm to 4:30pm ET, you can watch our first Capital Markets Day event, live. Simply input your name, company and email, then click 'register'.