Warning: Use of undefined constant PWP_NAME - assumed 'PWP_NAME' (this will throw an Error in a future version of PHP) in /home/urthecas/public_html/blog/wp-content/mu-plugins/wpengine-common/wpe-sec.php on line 63
 UrtheCast Reports 2016 First Quarter Financial Results - UrtheCast Blog

UrtheCast has a strong outlook for its core Earth Observation (EO) business as the Company continues to emerge as a legitimate new entrant in the global EO market, demonstrated by over $200 million of outstanding bids as it enters its strongest revenue generating quarters. UrtheCast’s Engineering Services business, aided by the recent amendment the $65 million contract from its largest customer, is also entering a period of accelerating growth.

The Company’s non-IFRS adjusted EBITDA, excluding share-based payments, was a loss of $6.0 million in the first quarter compared to a profit of $0.9 million in 2015. (The profit in Q1 2015 was the result of business interruption insurance proceeds of $2.3 million). At March 31, 2016, the Company had total cash balances of $39.0 million and working capital of $33.4 million. The Company expects non-IFRS EBITDA to improve throughout fiscal 2016, reaching positive non-IFRS EBITDA in Q3 2016.

“We have completed many milestones in Q1 that will allow us to achieve our goals in 2016,” explained Wade Larson, CEO and co-founder. “We have integrated our sales efforts with Deimos Imaging to offer our unique, integrated suite of four EO sensors globally, leading to quotes that have driven our total over $200 million, amended a contract with our largest customer to accelerate Engineering Services revenues, completed the flow of data from Deimos 1 to our UrthePlatform, developed a strong and growing sales funnel for our planned OptiSARTM constellation, and reached significant milestones in our Synthetic Aperture Radar (SAR) – all while maintaining a strong cash position and experiencing rapidly growing revenue.”

The following table provides selected financial information of the Company, which was derived from, and should be read in conjunction with, the audited consolidated financial statements for the year ended December 31, 2015. 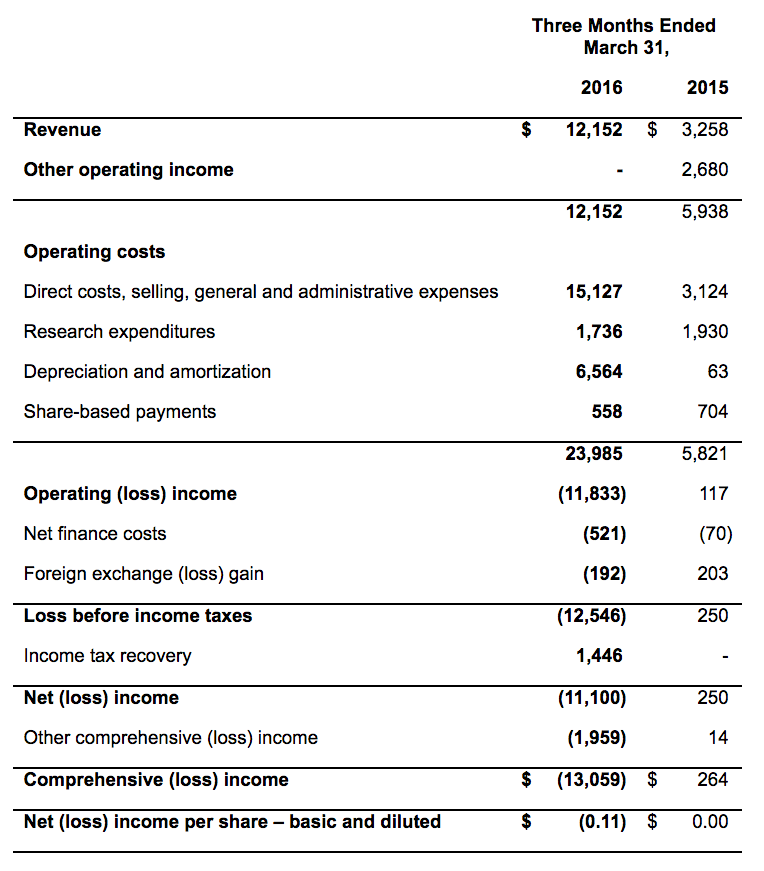 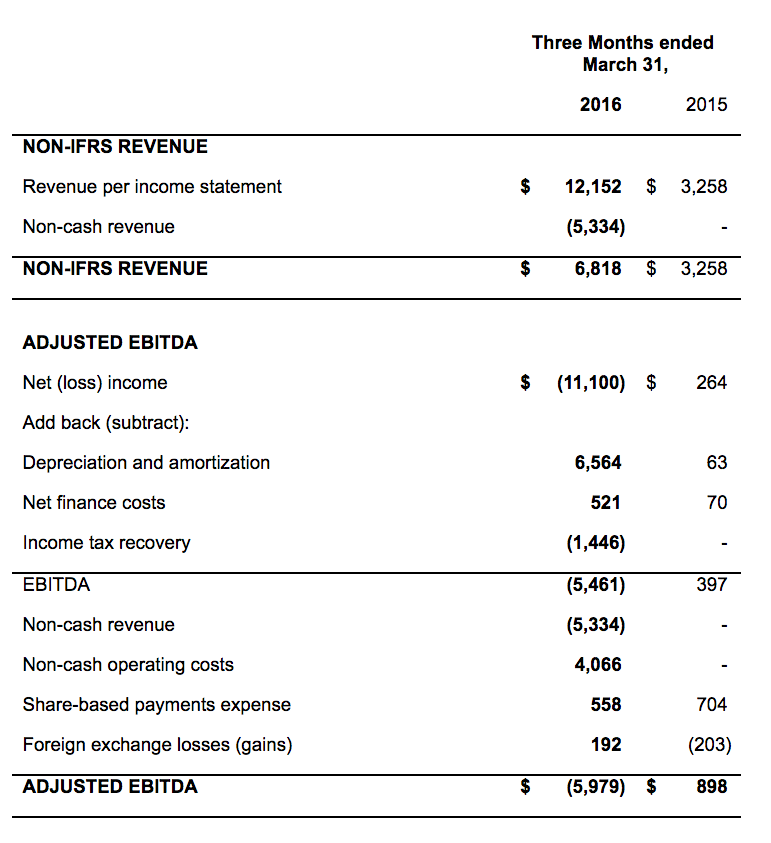 As previously announced, UrtheCast will host a conference call regarding its 2016 first quarter financial results at 4:45 p.m. ET (1:45 p.m. PT) on Tuesday, May 10, 2016 immediately prior to its annual general and special meeting of shareholders.

UrtheCast Corp. is a Vancouver-based technology company that serves the rapidly evolving geospatial and geoanalytics markets with a wide range of information-rich products and services. The Company currently operates four Earth Observation sensors in space, including two cameras aboard the International Space Station and two satellites, Deimos-1 and Deimos-2. Imagery and video data captured by these sensors is downlinked to ground stations across the planet and displayed on the UrthePlatform, or distributed directly to partners and customers. UrtheCast is also developing and anticipates launching the world’s first fully-integrated constellation of multispectral optical and SAR satellites, called OptiSAR™, in addition to its proposed UrtheDaily™ constellation concept, which the Company believes will together revolutionize monitoring of our planet with high-quality, medium and high-resolution, and high-coverage and high-revisit imagery in all weather conditions, any time of day. Common shares of UrtheCast trade on the Toronto Stock Exchange as ticker ‘UR’.

This release contains certain information which, as presented, constitutes “forward-looking information” or “forward-oriented financial information” within the meaning of applicable Canadian securities laws. Forward-looking information involves statements that relate to future events and often addresses expected future business and financial performance, containing words such as “anticipate”, “believe”, “plan”, “estimate”, “expect” and “guidance”, statements that an action or event “may”, “might”, “could” or “will” be taken or occur, or other similar expressions and includes, but is not limited to, statements relating to: UrtheCast’s expectations with respect its current sensors and proposed OptiSAR™ constellation and UrtheDailyTM  concept; financial guidance for the 2016 financial year; anticipated cash and financing needs; its plans for and timing of expansion of its product offering and value-added services; its future growth and operations plans; expectations regarding its sales funnel; and anticipated trends and challenges in its business and the markets in which it operates. Such statements reflect UrtheCast’s current views with respect to future events. Such statements are necessarily based upon a number of estimates and assumptions that, while considered reasonable by UrtheCast, are inherently subject to significant uncertainties and contingencies. Many factors could cause UrtheCast’s actual results, performance or achievements to be materially different from any future results, performance, or achievements that may be expressed or implied by such forward-looking statements, including, among others: any delays or failures in the design, development, construction, launch and operational commissioning of the proposed OptiSAR™ constellation; the Company being unable to convert the Memoranda of Understanding in respect of funding of the OptiSAR™ constellation into binding, definitive agreements; failures aboard the International Space Station (“ISS”) or the Deimos-1 or Deimos-2 satellites; failure to obtain, or loss of, regulatory approvals; uncertainties and assumptions in UrtheCast’s revenue forecasts; as well as those factors and assumptions discussed in UrtheCast’s annual information form dated March 29, 2016, (the “AIF”), which is available under UrtheCast’s SEDAR profile at www.sedar.com. Forward-looking information is developed based on assumptions about such risks, uncertainties and other factors set out herein, in the AIF, and as disclosed from time to time on UrtheCast’s SEDAR profile. UrtheCast undertakes no obligation to update forward-looking statements except as required by Canadian securities laws. Readers are cautioned against attributing undue certainty to forward-looking statements.

UrtheCast is attending the 2016 ESA Living Planet Symposium in Prague, Czech Republic, May 9-13.