Warning: Use of undefined constant PWP_NAME - assumed 'PWP_NAME' (this will throw an Error in a future version of PHP) in /home/customer/www/blog.urthecast.com/public_html/wp-content/mu-plugins/wpengine-common/wpe-sec.php on line 63
 UrtheCast Reports Strong Third Quarter 2016 Revenue and EBITDA Growth - UrtheCast Blog

The Company is pleased to report Q3 non-IFRS revenues of $15.5 million, a 68% increase over Q3 2015 non-IFRS revenue of $9.3 million. IFRS revenue for the quarter was $20.7 million, a 37% increase over the $15.0 million reported in the same period last year. Similarly, the Company’s non-IFRS adjusted EBITDA was positive $4.7 million in the quarter compared to a loss of $4.3 million in the same quarter of 2015, amounting to a $9 million improvement for Q3 in year over year adjusted EBITDA.  At September 30, 2016, the Company had total cash balances of $21.0 million and working capital of $22.4 million.

Revenues in Earth Observation Growing by 129% Quarter over Quarter

Revenues in the Company’s earth observation (EO) business in the quarter grew by 129% compared with Q2 2016, growing from $3.1 million to $7.1 million (non-IFRS reporting).

The Company continues to pursue opportunities for our technology and engineering business.  Though not limited to our Synthetic Aperture Radar (SAR) technology, it is our SAR IP in particular which is creating a lot of new commercial opportunities, both in Canada and internationally. The Company has now filed 5 patents relating to the OptiSAR technology, some of which have now reached the publication stage.

During the quarter, the Company recorded a non-cash asset impairment charge of $7.8 million for the ISS cameras due to a slow revenue ramp, ongoing operational and geopolitical challenges, and our ISS partner informing us of their intention to renegotiate a new agreement with UrtheCast going forward from January 1, 2017. The Company is now in active discussions to monetize our ISS cameras through alternative means, including licensing arrangements.

“We are very pleased to see our Earth Observation revenues growing so robustly, from $1.3 million in Q1 to $7.1 million in Q3,” explained Wade Larson, CEO and co-founder.  “The continuous growth of both our earth observation and engineering services businesses gives us the confidence and financial strength to pursue our goals for UrtheDaily and OptiSAR.  The non-cash write-down we’ve taken on our ISS cameras will not have a measurable impact on our business because of the proactive steps we took in not only buying Deimos Imaging but, since the acquisition, in consolidating and growing our sales forces, distribution channels, and global market presence for our Deimos satellites.”

The following table provides selected financial information of the Company, which was derived from, and should be read in conjunction with, the unaudited consolidated financial statements for the three and nine months ended September 30, 2016. 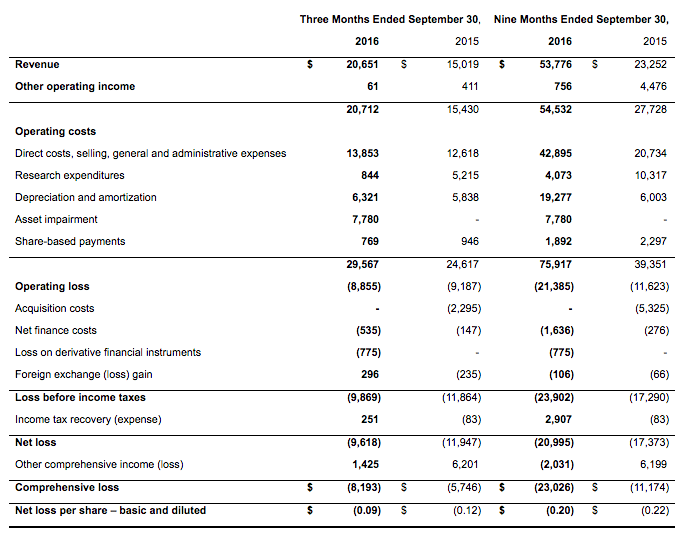 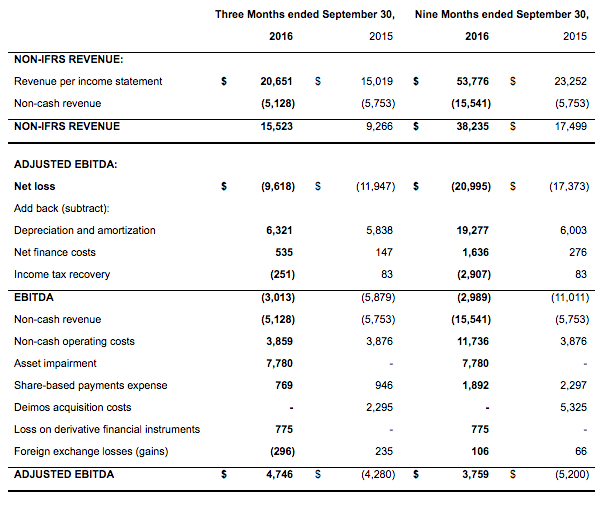 UrtheCast Corp. is a Vancouver-based technology company that serves the rapidly evolving geospatial and geoanalytics markets with a wide range of information-rich products and services. The Company currently operates four Earth Observation sensors in space, including two cameras aboard the International Space Station and two satellites, Deimos-1 and Deimos-2. Imagery and video data captured by these sensors is downlinked to ground stations across the planet and displayed on the UrthePlatform, or distributed directly to partners and customers. UrtheCast is also developing and anticipates launching the world’s first fully-integrated constellation of multispectral optical and SAR satellites, called OptiSAR™, in addition to its proposed UrtheDaily™ constellation, which the Company believes will together revolutionize monitoring of our planet with high-quality, medium and high-resolution, and high-coverage and high-revisit imagery in all weather conditions, any time of day. Common shares of UrtheCast trade on the Toronto Stock Exchange as ticker ‘UR’.

This release contains certain information which, as presented, constitutes “forward-looking information” or “forward-oriented financial information” within the meaning of applicable Canadian securities laws. Forward-looking information involves statements that relate to future events and often addresses expected future business and financial performance, containing words such as “anticipate”, “believe”, “plan”, “estimate”, “expect” and “guidance”, statements that an action or event “may”, “might”, “could” or “will” be taken or occur, or other similar expressions and includes, but is not limited to, statements relating to: UrtheCast’s expectations with respect its current sensors and proposed OptiSAR™ and UrtheDailyTM constellations; financial guidance for the 2016 financial year; anticipated cash and financing needs; its plans for and timing of expansion of its product offering and value-added services, including providing additional data sources on the UrthePlatform; its future growth and operations plans, including with respect to the RFP; expectations regarding its sales funnel; significant changes expected in 2017 to the agreement with our Russian partners related to the cameras aboard the Russian segment of the International Space Station (“ISS”); efforts to monetize the cameras aboard the ISS through alternative means; management’s expectations regarding recoverable amounts of such assets; and anticipated trends and challenges in its business and the markets in which it operates. Such statements reflect UrtheCast’s current views with respect to future events. Such statements are necessarily based upon a number of estimates and assumptions that, while considered reasonable by UrtheCast, are inherently subject to significant uncertainties and contingencies. Many factors could cause UrtheCast’s actual results, performance or achievements to be materially different from any future results, performance, or achievements that may be expressed or implied by such forward-looking statements, including, among others: any delays or failures in the design, development, construction, launch and operational commissioning of the proposed OptiSAR™ or UrtheDailyTM constellations; the Company being unable to convert the Memoranda of Understanding in respect of funding of the OptiSAR™ constellation into binding, definitive agreements; failures aboard the International Space Station (“ISS”) or the Deimos-1 or Deimos-2 satellites; failure to obtain, or loss of, regulatory approvals; uncertainties and assumptions in UrtheCast’s revenue forecasts; as well as those factors and assumptions discussed in UrtheCast’s annual information form dated March 29, 2016, (the “AIF”), which is available under UrtheCast’s SEDAR profile at www.sedar.com. Forward-looking information is developed based on assumptions about such risks, uncertainties and other factors set out herein, in the AIF, and as disclosed from time to time on UrtheCast’s SEDAR profile. UrtheCast undertakes no obligation to update forward-looking statements except as required by Canadian securities laws. Readers are cautioned against attributing undue certainty to forward-looking statements.

Washington, DC: The Most Green Roofs on the Continent, and Counting

Forget the red, white and blue — Washington, D.C. has been looking mighty green for years. In fact, the U.S. capital is on a mission to be the greenest city in the nation, and part of that green initiative involves turning building roofs into green space. The Washington D.C. Metropolitan Region installed the most green roofs on the continent [...]