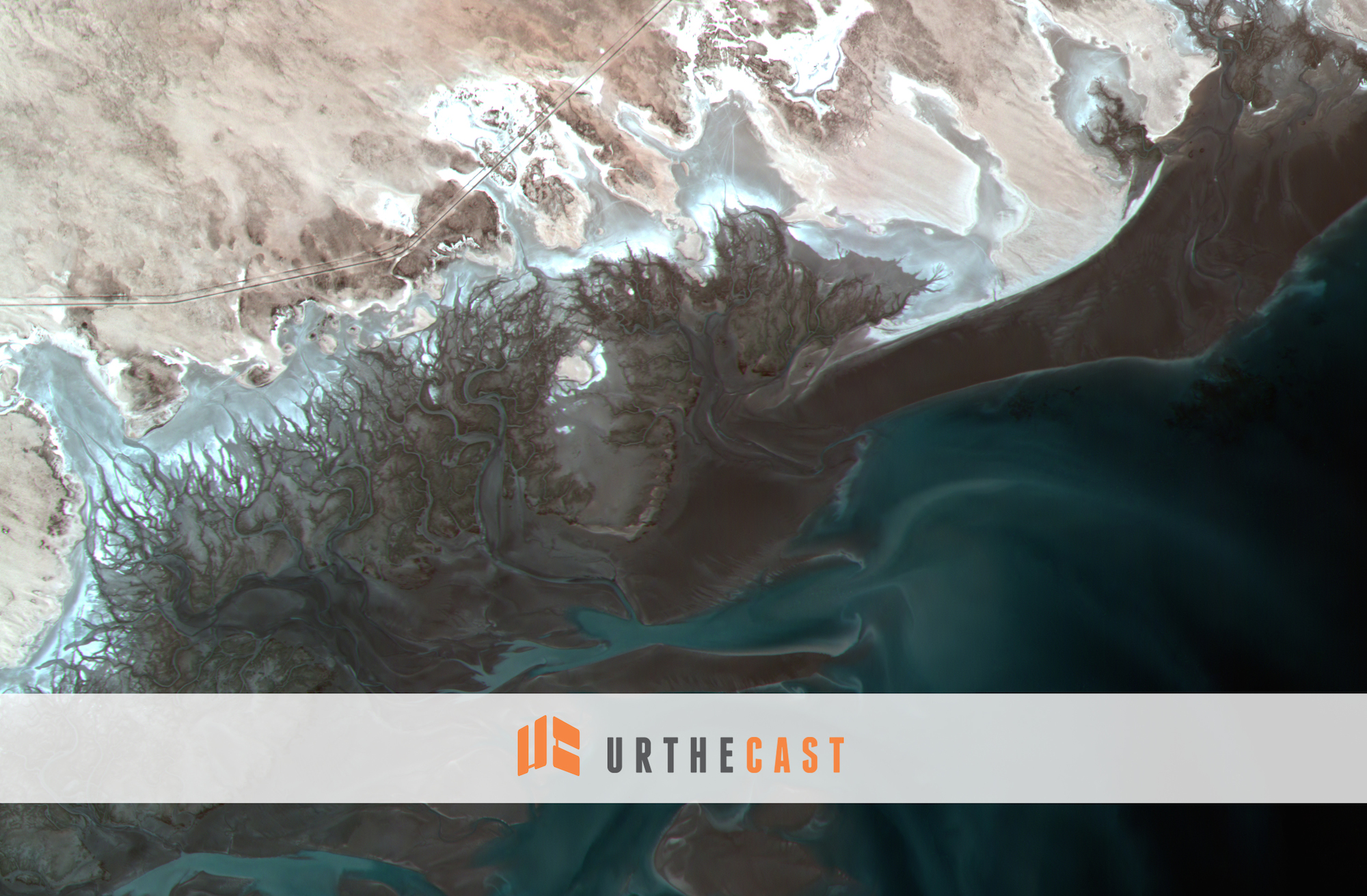 Captured on April 30, 2014, at 10:15 am MST by our medium-resolution camera, Theia, UrtheCast’s most recent image begins at the north end of the Gulf of California, and leads to Ajo, Arizona, in the Sonoran Desert. www.urthecast.com/firstlight (CNW Group/UrtheCast Corp.)

“With the successful installation of our cameras and the release of our first light images, we’ve begun what is proving to be a very strong year for the company,” commented Scott Larson, UrtheCast’s Chief Executive Officer. “Despite the current political climate, our presence aboard the ISS has been increasingly advantageous, as the Station continues to be exempt from political conflict here on Earth. Our partnerships and business development efforts remain on track and we are looking forward to continually releasing more imagery and Ultra HD color video, as well as launching our interactive web platform. Further, our business development efforts continue to go well, with strong interest from additional distributors, which would add to our current annual commitments of $26 million.”

UrtheCast had cash reserves of $17 million at March 31, 2014 as compared to $22 million at December 31, 2013. During the quarter our net use of cash of $5.1 million was attributed to uses of $2.8 million and $3.8 million for operating and investing activities, respectively. This was reduced with the $1.5 million received from financing activities.

At March 31, 2014, we had outstanding commitments of $0.5 million for post-delivery support of our camera equipment and for other purchases of property and equipment. Therefore, we anticipate that our cash expenditures for property and equipment in 2014 will be substantially reduced, when compared to the approximately $16.9 millionspent in 2013.  Based on our expected commencement of initial operations in the second half of 2014, we expect that our cash used for operating activities will increase in 2014, as compared to the $10.5 million used in 2013.  However, the reduction in cash required for property and equipment will be substantially greater than the expected increase in cash used for operations.

UrtheCast Corp. is a Vancouver-based technology company that is developing the world’s first Ultra HD video feed of Earth, streamed from space in full color. Working with renowned aerospace partners from across the globe, UrtheCast has built, launched, installed, and will soon operate two cameras on the Russian segment of the ISS. Video and still image data captured by the cameras will be downlinked to ground stations across the planet and displayed on the UrtheCast web platform, or distributed directly to exclusive partners and customers. UrtheCast’s cameras will provide Ultra HD video and still imagery of Earth that will allow for monitoring of the environment, humanitarian relief, social events, agricultural land, etc. Common shares of UrtheCast trade on the Toronto Stock Exchange as ticker ‘UR’.

This release contains certain information which, as presented, constitutes “forward-looking information” within the meaning of applicable Canadian securities laws. Forward-looking information involves statements that relate to future events and often addresses expected future business and financial performance, containing words such as “anticipate”, “believe”, “plan”, “estimate”, “expect”, and “intend”, statements that an action or event “may”, “might”, “could”, “should”, or “will” be taken or occur, or other similar expressions and includes, but is not limited to, statements about the commissioning of the cameras and the BPP, plans to operate camera components on, and stream video footage from, the ISS, proposed image and video product offerings, expectations regarding the commencement of commercial operations, expected partners and customers to distribute such products and expected costs and revenues. Forward-looking statements and information are subject to various known and unknown risks and uncertainties, many of which are beyond the ability of UrtheCast to control or predict, and which may cause UrtheCast’s actual results, performance or achievements to be materially different from those expressed or implied thereby, including, but not limited to, damage which may have occurred to the cameras during launch or installation, unexpected changes in Russian or Canadian government policies, technology changes, reliance on key personnel, the potential for conflicts of interest among certain officers, directors or promoters with certain other projects, competition, risks related to the business activities of Longford Energy Inc. (now UrtheCast) prior to the reverse take-over transaction with Earth Video Camera Inc., as well as those factors discussed in the Company’s annual information form dated March 26, 2014, (the “AIF”) and the Company’s short form base shelf prospectus dated April 7, 2014 (the “Prospectus”) which are available under UrtheCast’s SEDAR profile at www.sedar.com. Forward-looking information is developed based on assumptions about such risks, uncertainties and other factors set out herein, in the AIF and Prospectus, and as otherwise disclosed from time to time on UrtheCast’s SEDAR profile.

Image with caption: “Captured on April 30, 2014, at 10:15 am MST by our medium-resolution camera, Theia, UrtheCast’s most recent image begins at the north end of the Gulf of California, and leads to Ajo, Arizona, in the Sonoran Desert. www.urthecast.com/firstlight (CNW Group/UrtheCast Corp.)”.

Taking place this week in Geneva, Switzerland, The Geospatial World Forum (GWF) is one of the world’s most reputable geospatial events, hosting 1200+ attendees and 500+ organizations from across the globe. GWF  2014 marks UrtheCast’s first visit to the conference, where we’re discussing our two ISS cameras and interactive platform, all of which will be instrumental in our [...]