Warning: Use of undefined constant PWP_NAME - assumed 'PWP_NAME' (this will throw an Error in a future version of PHP) in /home/customer/www/blog.urthecast.com/public_html/wp-content/mu-plugins/wpengine-common/wpe-sec.php on line 63
 UrtheCast Reports Fourth Quarter And 2013 Annual Financial Results

VANCOUVER, March 27, 2014 | UrtheCast Corp. (TSX:UR) (“UrtheCast” or the “Company”) is pleased to announce its financial results for the three and twelve months ending on December 31, 2013.

Our operating expenditures increased significantly in 2013 when compared with the prior year, as additional employees were added to the workforce to support the development of the infrastructure required to prepare us for the launch of the MRC and HRC in late 2013 and the anticipated start of commercial revenues in the first half of 2014. 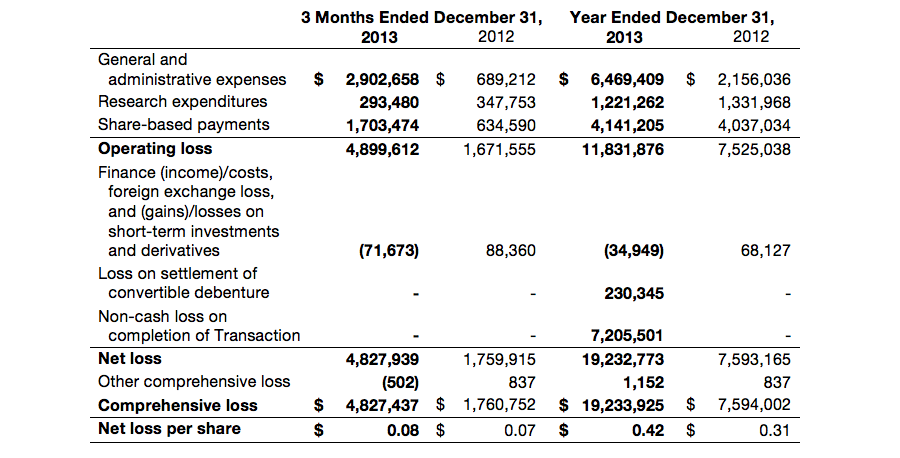 Going into 2014, we had outstanding commitments of only $0.9 million for post-delivery support of our camera equipment and for other purchases of property and equipment. Therefore, we anticipate that our cash expenditures for property and equipment in 2014 will be substantially reduced as compared to the approximately $16.9 million spent in 2013.  Assuming that we commence our initial operations in the second quarter of 2014, we expect that our cash used for operating activities will increase in 2014, as compared to the $10.5 million used in 2013. However, the reduction in cash required for property and equipment will be substantially greater than the expected increase in cash used for operations. 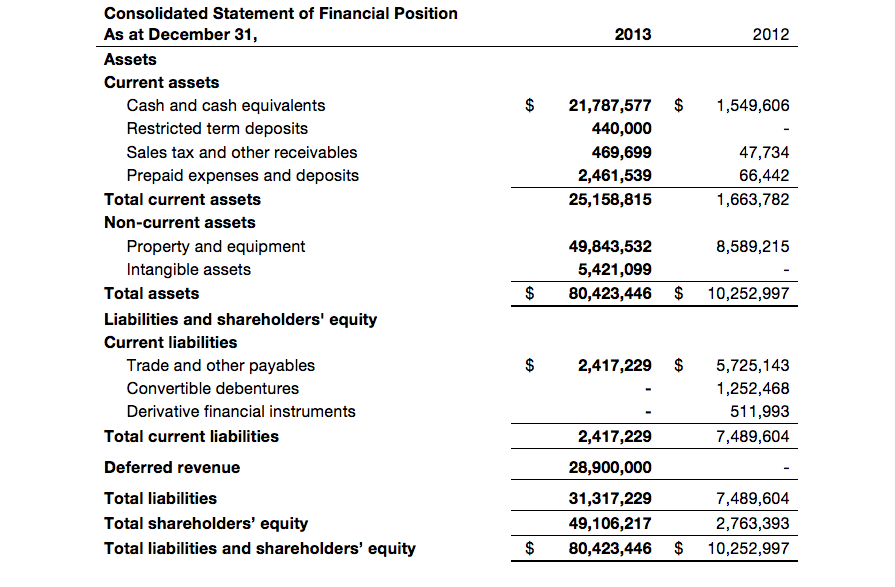 In 2011, the Company entered into a strategic relationship with Energia and Roscosmos to allow installation of our cameras aboard the ISS. This relationship has provided, and is expected to continue to provide, significant ‘in-kind’ contributions to the cost of the project, such as hardware integration, crew training, hardware delivery to the ISS, provision of a pointing platform, maintenance, extra vehicular spacewalks, power supply to the cameras and the locations on the ISS to mount the cameras. In return for these contributions to the project, Energia will receive certain rights to the imagery, for use by Russian Government agencies, over the life of the project. During the fourth quarter we capitalized an initial amount of $28.9 million into the carrying value of the camera equipment, representing the fair value of the services that we have received up to December 31, 2013 for the launch of the cameras and the initial installation onto the exterior of ISS. The accounting for this non-cash transaction is more fully described in the notes to our consolidated financial statements.

This arrangement has reduced, and is expected to continue to reduce, our need to raise additional capital to build, launch, and operate our cameras in space. This savings is in two forms, the first being the additional costs that we would have had to invest to build the hardware systems required to operate as a standalone satellite, including solar panels and downlink communication systems, saving dilution to our current shareholders. Secondly, the annual costs associated with the operation of the cameras, including the power required to operate the cameras, any required maintenance and the provision of the downlink communications network from the ISS to the ground systems network, will be borne by Energia. The overall effect of this arrangement has enabled us to launch two cameras into space at a fraction of the cost of building and launching independent satellites, which can range from $100 million to $500 million.

“UrtheCast achieved many significant milestones in 2013,” explains Scott Larson, UrtheCast’s Chief Executive Officer. “What was key amongst these achievements was the successful financing of the company, which allowed us to complete the development and installation of the cameras. It also set the foundation for the commencement of company operations in 2014.”

The full financial statements and accompanying Management’s Discussion & Analysis are available on UrtheCast’s profile on the System for Electronic Document Analysis and Retrieval (“SEDAR”) at its website www.sedar.com and on UrtheCast’s website at www.urthecast.com.

UrtheCast Corp. is a Vancouver-based technology company that is developing the world’s first Ultra HD video feed of Earth, streamed from space in full color. Working with renowned aerospace partners from across the globe, UrtheCast has built, launched, installed, and will soon operate two cameras on the Russian segment of the ISS. Video and still image data captured by the cameras will be downlinked to ground stations across the planet and displayed on the UrtheCast web platform, or distributed directly to exclusive partners and customers. UrtheCast’s cameras will provide Ultra HD video and still imagery of Earth that will allow for monitoring of the environment, humanitarian relief, social events, agricultural land, etc. Common shares of UrtheCast trade on the Toronto Stock Exchange as ticker ‘UR’.

This release contains certain information which, as presented, constitutes “forward-looking information” within the meaning of applicable Canadian securities laws. Forward-looking information involves statements that relate to future events and often addresses expected future business and financial performance, containing words such as “anticipate”, “believe”, “plan”, “estimate”, “expect”, and “intend”, statements that an action or event “may”, “might”, “could”, “should”, or “will” be taken or occur, or other similar expressions and includes, but is not limited to, statements about the commissioning of the cameras, plans to operate camera components on, and stream video footage from, the ISS, proposed image and video product offerings, expected partners and customers to distribute such products and expected revenues. Forward-looking statements and information are subject to various known and unknown risks and uncertainties, many of which are beyond the ability of UrtheCast to control or predict, and which may cause UrtheCast’s actual results, performance or achievements to be materially different from those expressed or implied thereby, including, but not limited to, damage which may have occurred to the cameras during launch or installation, unexpected changes in Russian or Canadian government policies, technology changes, reliance on key personnel, the potential for conflicts of interest among certain officers, directors or promoters with certain other projects, competition, risks related to the business activities of Longford Energy Inc. (now UrtheCast) prior to the reverse take-over transaction with Earth Video Camera Inc., as well as those factors discussed in the Company’s annual information form dated March 26, 2014, (the “AIF”) and the Company’s preliminary short form base shelf prospectus dated March 26, 2014 (the “Prospectus”) which are available under UrtheCast’s SEDAR profile at www.sedar.com. Forward-looking information is developed based on assumptions about such risks, uncertainties and other factors set out herein, in the AIF and Prospectus, and as otherwise disclosed from time to time on UrtheCast’s SEDAR profile.

VANCOUVER, Feb. 27, 2014 | UrtheCast Corp. (TSX:UR) (“UrtheCast” or “the Company”) is pleased to announce that it has signed six new data distributors for its high-resolution Earth video and imagery. This Ultra HD color video and medium-resolution imagery will be captured from UrtheCast’s two cameras ― a 1-meter class, full color video camera and a [...]