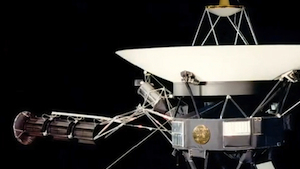 Voyager 1 is used to being first. Fourteen years ago, it surpassed the travel distance of any other Earth-launched spacecraft. Now Voyager 1 may soon cross into interstellar space. As far as we know, it will be the first spacecraft to cross this great divide.

If that’s not amazing enough, consider that Voyager 1 has made it that far on 1970s technology. Designed to last five years, Voyager 1 has held together for almost 35 — yes, that’s seven times as long as originally intended —  and is now more than 17.8 billion kilometers away. NASA now speculates that the spacecraft could be sturdy enough to last until 2020 or beyond. That’s not all. The more you learn about Voyager 1, the more amazing the story becomes.

Originally launched in Florida Sept. 5, 1977, Voyager 1 was actually two weeks behind Voyager 2, which launched Aug. 20, 1977. Both were developed to conduct closeup studies of Jupiter and Saturn, Saturn’s rings, and nearby moons. The timing of the missions were designed to take advantage of a once-every-175-years-or-so alignment of Jupiter, Saturn, Uranus, and Neptune, that would allow the spacecraft to gravity hop from one destination to the next, eliminating the need for large propulsion systems.

Despite leaving last, Voyager 1 arrived at Jupiter and Saturn first. Both spacecrafts had achieved their missions by the early 1980s. Still going strong, Voyager 2 was sent on a path to study Uranus and Neptune, while Voyager 1 was sent on interplanetary studies. Eventually, the decision was made to let them loose to see what they could find.

After providing 5 trillion bits of scientific data on the farthest planets from the sun, the spacecrafts continue to transmit information on the sun’s magnetic field and the composition of solar wind particles, among other findings.

To get the two spacecraft as far as they have (Voyager 2 is a few billion kilometres behind) NASA controllers have spent the last two decades gradually turning off systems to conserve power. Some of those systems include heaters used to keep scientific instruments running, but a number of instruments continue to operate even though temperatures have fallen below design limits.

Now nearing interstellar space, Voyager 1 first must pause; that is, it first must reach the heliopause, which is at the outer edge of the heliosphere. Created by solar winds from the sun, the heliosphere is a “great magnetic bubble that surrounds the sun and planets,” according to NASA.  For the last few weeks, Voyager 1’s sensors have detected an escalation in high energy particles, indicating that it may be near the heliopause.

To the Heliopause, and Beyond

What’s beyond the heliopause is subject to much scientific debate — finding the answer could be Voyager’s next major accomplishment. That is, if it can just hold on — considering that old technology and all.

UrtheCast – the first high-definition (HD), streaming video platform of Earth – and Ustream Inc., the leader in live, interactive, streaming video, announced today an exclusive partnership to power UrtheCast’s weekly live programming to Ustream’s wide audience. The UrtheCastTV program provides insight into the realm of a space technology startup, moving toward launch in early 2013. Viewers can tune in to UrtheCast’s Ustream channel at http://www.ustream.tv/urthecast every Tuesday, at 4:00 p.m. PST.